A white beam lit up the wall above my head and I gathered the faux-fur covers around my shoulders and edged towards the window. It was cold in my compartment and the air held the sour dankness of the guards’ cheap cigarettes. Lifting a corner of the curtain, I squinted outside. Disorientated, I touched my forehead to the glass and then I saw them, smiling. Above the clocks found on the front and back of each of the country’s railway stations, hung the illuminated, framed round faces of Kim Il-sung and Kim Jong-il, a paternal picture of jollity. It was three o’clock in the morning. Then I remembered where I was: on a train in North Korea, travelling overnight from Chongjin to the port city of Wonsan.

Crawling back into bed I took out my iPhone and began to watch a video I had filmed that morning at the Steelworks Kindergarten in Chongjin. More than 25 children aged from three to seven years old had put on a performance for our tour group so precisely styled and executed it would have put the Bolshoi Ballet to shame. The train eased away from the station as I flicked through photographs of their playground which had featured a slide, a rocket, a tank, and a submarine with a torpedo on the side. Unable to sleep, I made some notes by the light of my phone, then panicked and tried to scratch them out in case anyone chose to read them. Realising I was being ridiculous, I gave up as the train began to sway in the darkness, and dozed off under the mustiness of the covers.

When I began my train travels around the world, I wrestled with the concept of visiting North Korea. Like the majority of travellers, I was unaware that the country has been open to tourists since 1953, although until 1988 it was restricted to Soviet countries only. Currently more than 5,000 Western tourists visit North Korea each year, with sanctions and sporadic nuclear testing doing little to dissuade visitors. But my reason for visiting was simple: I was curious. I don’t believe everything I read, see or hear, preferring experience to prejudgment. So when I discovered that the British-owned, Beijing-based Koryo Tours runs an annual ten-day train excursion, extending beyond the showcase capital of Pyongyang – and that it coincided with the 70th anniversary of the Workers’ Party – I booked my place on board, amused that it cost the same as one night on the Venice Simplon-Orient-Express.

The tour began in Pyongyang and would take us to Wonsan, Hamhung and Chongjin before finishing back in Pyongyang. Curious about the kind of people who would want to visit North Korea, I was pleasantly surprised by the motley crew of fourteen with whom I was travelling, which included a Canadian on his fourth visit, an American veteran, an IT consultant from Cheltenham and a couple on honeymoon. Unable to travel on public transport without close supervision, we were provided with a chartered train comprising Swiss carriages from the 1970s with comfy seats and enormous pull-down windows. It was a far cry from the rusting old Chinese trains reserved for North Koreans only. 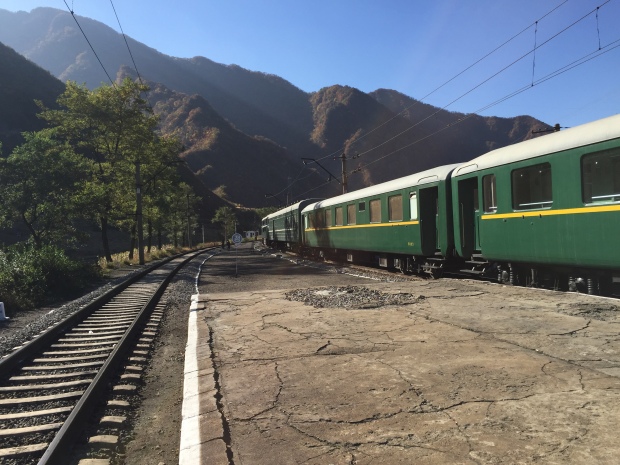 From the outset it was made clear that this was the Democratic People’s Republic of Korea, or the DPRK – definitely not North Korea. On the first morning we arrived at Pyongyang station just as the clock marked the hour and a tune crackled from loudspeakers in a haunting minor key, like the soundtrack to a sci-fi movie. The station looked like a concrete airport hangar, and was empty but for our train and our guards waiting on the platform. No ticket machines, no passengers, no trains, no whistles, no announcements. Just us. Once our bags were stacked and we’d run around and checked out the sleeper berths, fingered the blankets, peered at the toilet, and forced down the windows, we were on the move and began to glide out of the city, past the anomalous, rocket-shaped Ryugyong Hotel gleaming in the sunshine. Within minutes we were racing through the countryside, fields ablaze with corn, the odd cyclist carrying a stack. A circle of jets in formation passed overhead, practising for the upcoming anniversary celebrations, and everyone had taken up spots at the windows, cameras in hand, absorbing the shiny newness of it all.

It was refreshing not to be in the constrained confines of Pyongyang, but in a more natural environment watching people go about their daily routine unhindered. However, the narrative is never as linear as it seems. It helped that we were travelling with Geoffrey Cain, a former journalist and author, now studying a doctorate in Korean Studies. Cain explained how North Korean towns and villages operate on a tiered system – if you’re from a politically favoured family, you get the privilege of living in Pyongyang, whereas those lower down the scale must live elsewhere. The privileged also receive access to better education and infrastructure – which includes railway lines. So even though the towns we passed seemed lovely, the houses sturdy and the people even more so, these areas were significantly more prosperous than others.

Scepticism was my default setting, but it became problematic when that seeped into paranoia and I struggled to shrug it off. The human instinct to interact was unavoidable, but I was mindful that there was a fine line to tread between wanting to engage with Koreans, and treating them like zoo animals, staring, waving desperately to eke out a reaction. For the most part photography was restricted and our guides constantly reminded us not to use cameras at stations or to photograph passenger trains should we come face to face, which happened on one or two occasions. We would draw parallel and the Koreans would gather at the window, non-plussed, then most would break into smiles and wave before being reprimanded by elders – one even blew a kiss – but that couple of metres of separation between our windows felt more like a million miles. The conflicting feeling was summed up best by the member of our group from Cheltenham who pulled out his earphones and said: “If we could just sit down and have a cup of tea with them, it would be lovely.”

The train tour was largely like a cruise on rails. During the day we boarded a coach and were driven around to various sights that included a fertiliser factory, a kindergarten, a department store – and to the mausoleum which houses both the late leaders in glass cases, a surreal experience. Otherwise we stayed on board, chatting, reading books on the Kims and eating fried eggs, steamed rice and soup, with heaps of kimchi and blood sausage. At night we would check into hotels, which certainly varied in livability. Chongjin has only recently opened up for foreign visitors and is tangibly more sensitive than other regions. The Chongjin Tourist Hotel, like most other North Korean buildings, is pigeon-grey with little more than coloured murals of the leaders alongside clumsily painted pictures of a purple orchid and a red begonia, known respectively as the Kimilsungia and the Kimjongilia. The hotel provides cold water for one hour in the evening and two hours in the morning, the curtains are grey, the wallpaper bubbles and the floor comprises yellow plastic rolled out in sheets. But we weren’t here for the luxury.

On the final weekend we witnessed the parade for the 70th anniversary of the Workers’ Party, but from the street only – tourists aren’t allowed into an event when Kim Jong Un is present. Tanks and lorries with rockets and missiles passed through the streets as soldiers waved from behind the wheel and the crowd cheered through the rain, smoke and rumble of tires. But for me the highlight of the trip was an evening on the square in Wonsan, where thousands of students were practising a group dance for the celebrations. Having watched from the sidelines, our guides indicated that we could join in if we wanted to, and the students broke their circle to take our hands, leading us and showing us how to dance. It was an intimate, overwhelming moment, feeling the warm palms of Korean students, twirling and swaying to their music. For five minutes we were all the same. An unbroken chain of human beings, moving to the same beat. 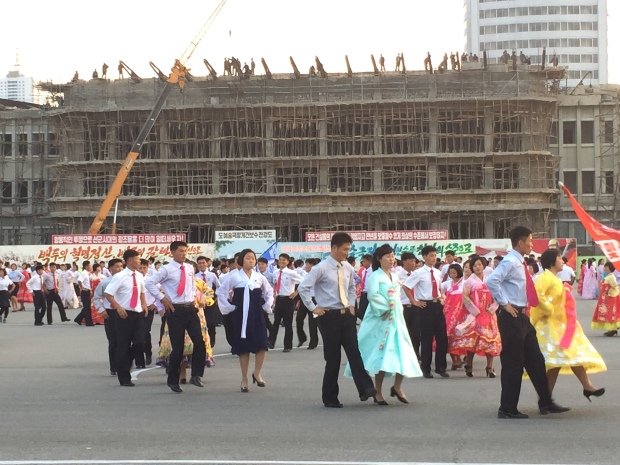 From Wonsan to Pyongyang there was a tangible air of sadness that after ten days it was our last train ride as a “family”. And it was a particularly beautiful journey: the canyons appeared aflame with autumnal maple trees draping a shawl of gold and red up the valleys, and the river bubbled and rolled in the sunshine. Free from the pollution of factories and cars the air almost cut my lungs with its freshness, and twinned with an unusually blue sky, it was a pleasure to be hanging from the windows. Once again, I had almost forgotten where I was, then just as we rounded a corner a giant mural of Kim Il Sung on a blood-red background loomed into view, waving and smiling.

To book the ten-day Eastern Adventure by Rail, visit www.koryogroup.com