Enriched oxygen was supposed to smell and taste sweet. But the stream of air hissing out of the gold nozzle by my head had dank undertones of cigarettes that induced a wave of nausea. Reaching up to 5,200 metres above sea level, train compartments on the Qinghai railway are fitted with oxygen jets to alleviate the symptoms of altitude sickness, along with several warning signs that do little to deter stubborn Chinese passengers who hide in the loos and smoke.

Pulling on my thermals, I readjusted the surgeon’s mask around my mouth and nose and sulked quietly, my asthmatic lungs withering in despair. After a month on Chinese trains I’d become accustomed to the spitting, hacking and crunch of empty sunflower seeds beneath my feet, but the constant flouting of no-smoking rules had turned me into Miss Marple, and had me and my nostrils twitching our way up the train, sniffing at compartment doors to admonish the culprits. 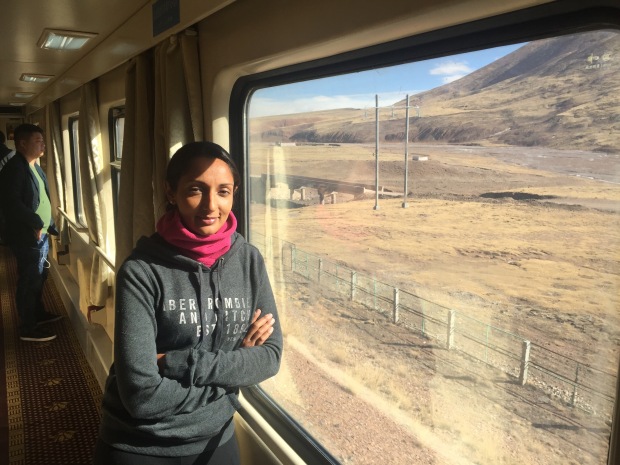 Now resigned to the situation, I pulled down a seat in the corridor and leant against the window watching the soft, sugar-dusted brown mountains slope in the foreground. Tumbles of white cloud rolled around a sky so blue it made my eyes shrink from the glare, and rough-looking yaks nibbled at the yellow dryness of the plateau. Silver lakes like spills of liquid mercury were darkened by shadows of cloud and every hour or so the odd nomadic yurt appeared fringed with multi-coloured prayer flags. As the train climbed towards Lhasa we swept closer to the shimmering blue ice and snow of the Kunlun mountains and I soon forgot about the headaches and shortness of breath. I had seen nothing like this in my life and knew I never would again. 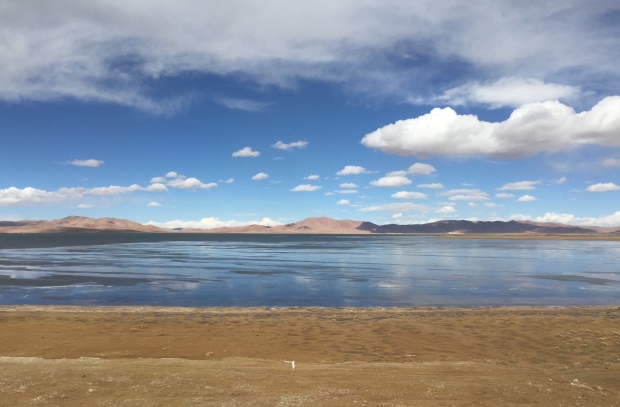 Opened in 2006, the Qinghai railway from Xining to Lhasa is a feat of engineering excellence, holding the record for the world’s highest track and the highest station at Tanggula. Passing through an earthquake zone, the train travels on more than 300 miles of track built on permafrost that can melt at the slightest increase in temperature – a problem which engineers combatted by circulating liquid nitrogen below the rail bed in an attempt to keep it frozen year-round.

But complications surrounding the railway are not just limited to practicalities. The birth of the railway was considered an ecological threat to the region and also a cultural one as it opened up another route for the already huge influx of ethnic Han Chinese flooding Lhasa and displacing the Tibetan people. Even today, it’s unusual to see Tibetans on board, almost all of whom are forbidden by the Chinese government from travelling in and out of Tibet.

However, I had made my peace with my choice to travel to Tibet. I had travelled to North Korea a month earlier and had had no regrets, witnessing the country first-hand instead of reading reports and forming opinions, and I wanted to do the same in Tibet. As the train approached Lhasa, red Chinese flags poked up from every house and I took a deep breath before setting foot onto the roof of the world.

New year, new hair, new paperback out this week! Photo credit: Instagram Husband.
So exciting to come back from hols to find two boxes of books containing the paperback of Around the World in 80 Trains and the Czech edition, too. Just call me Monisha Rajeshova...
Wrote about the leg from London to Beijing for the world railways special in The Guardian this weekend, alongside some beautiful images from @marcsethi to tie in with the paperback release of Around the World in 80 Trains next week @bloomsburypublishing
Ten years ago today I had just arrived in India as a single woman with no job and a vague hope of writing a book. Two books and two wet-suited strawberries later I’m going to have to reassess my travels, but for now an all-inclusive in Tenerife is doing the job nicely! 😜
There’s a 💩 in the swimming pool so dad is in the crèche with the little people, and I am.... alone... at last. And it is bliss. 💃🏽💃🏽💃🏽
2019 saw the release of my second book, the birth of my second beloved daughter, and two awards for my writing.. so it’s safe to say it’s been a wonderful year for me. Thank you to all the readers among you who have bought my books and continued to enjoy my writing. You make it all worth it! Wishing you all a prosperous new year. Xx #topnine2019 #happynewyear2020