Licking the salty oil from my fingers, I considered buying another plate of hot, golden vadas (fritters) when a vendor pushed through the door calling “chicken lollipop, chicken lollipop”. Whipping out a roll of 10-rupee notes, I salivated as he produced four tiny chicken legs wrapped in foil. I was barely three hours into the 11-hour journey and I’d already wolfed down idlis and coconut chutney, deep-fried baby corn, crisp pakoras and at least four cups of treacle-sweet tea.

The Mandovi Express from Mumbai CST to Madgaon in Goa is one of Indian Railways’ most beloved trains. Winding down the Konkan coast, it passes through 92 tunnels and crosses 2,000 bridges including the Panval Nadi viaduct, the highest in India. This is one of the only stretches of India’s 40,400 miles of track that the British dared not construct, leaving it to Indian engineers to bore through the Western Ghats, succumbing to flash floods and landslides in an attempt to extend the line through some of the most treacherous, but beautiful, scenery in India. 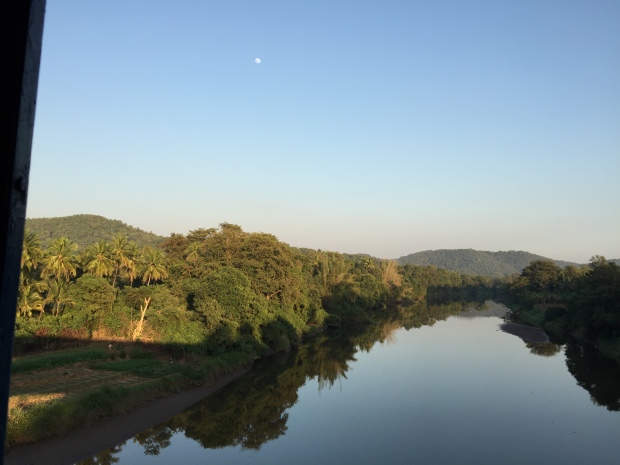 Flanked by jungles of palm and silver sheets of water cascading down cliffs, passenger trains first ran in 1998 and it soon became a favourite among India’s rail enthusiasts – not least for its pantry car. Last year a terrifying rumour ran riot that Indian Railways was going to do away with pantry cars and begin selling fast food. It would have been a travesty for most travellers who look forward to the chaiwallahs, regional varieties of hot snacks, biryani, and ice cream. Fortunately it turned out to be false and it was a relief to stroll through the car and watch Ahuja Caterers’ chefs rolling dough for fresh chapatis, chopping chunks of fiery papaya and tossing cauliflower in karahis.

Six years ago I had fallen in love with this train. Travelling at no more than a jogging pace, the train has doors that are always open, allowing passengers to lean out. It was here that I used to read books, enjoying the sunshine on my arms, away from the chill of the air-conditioned carriages. Now, as I perched on the top step, the warm wind tickling my cheeks, the smell of recently burnt fields sweeping through the carriage, I felt a surge of nostalgia and a sense of home. I watched as bullocks swished their tails by rivers, little white birds perched on their backs. Children played cricket with planks and tennis balls, pausing only to wave as the train rattled past, and the sun skimmed the tops of the palms. At that moment I realised there was a magic and charm in travelling on Indian trains that no other country could match.

If travelling on more than one train in India, it makes sense to buy an IndRail pass from Shankar Dandapani, the UK Indian Railways agent (info@indiarail.co.uk).